Making Welsh Cakes in the honor of St. David of Wales. A recipe with tradition! Given to me by my friend Sarah, this recipe has made it’s rounds and enjoyed by many both who are and are not Welsh!

A bit of previously documented history on St. David:   “The first day of March was chosen in remembrance of the death of Saint David. Tradition holds that he died on that day in 589. The date was declared a national day of celebration within Wales in the 18th century.

Saint David (Dewi Sant’s) was born towards the end of the 5th century. He was of the royal house of Ceredigion, and founded a Celtic monastic community at Glyn Rhosyn (The Vale of Roses) on the western headland of Pembrokeshire (Sir Benfro), at the spot where St David’s Cathedral stands today. David’s fame as a teacher and ascetic spread throughout the Celtic world. His foundation at Glyn Rhosin became an important Christian and the most important centre in Wales. The date of Dewi Sant’s death is recorded as 1 March, but the year is uncertain – possibly 588. As his tearful monks prepared for his death Saint David uttered these words: ‘Brothers be ye constant. The yoke which with single mind ye have taken, bear ye to the end; and whatsoever ye have seen with me and heard, keep and fulfil’.

For centuries, 1 March has been a national festival!  Saint David was recognised as a national patron saint at the height of Welsh resistance to the Normans. Saint David’s Day was celebrated by Welsh  from the late Middle Ages and by the 18th century the custom had arisen to the making of confectioners producing ‘Taffies’ – gingerbread figures baked in the shape of a Welshman riding a goat – on Saint David’s Day.

Saint David’s Day is not a national holiday in the United Kingdom of Great Britain and Northern Ireland.  It is strictly celebrated by Welsh societies, with traditional celebrations that they carry with them no matter where they are in the world with dinners, parties,  (recitals and concerts).”

Sprinkle with sugar and enjoy!

Small, flat and round sweet cakes traditionally from South Wales, UK.  These delicious
cakes are still very popular in Wales and with great pride is handed down through the generations. 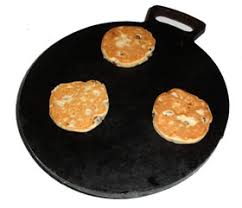 Warm griddle on low heat while ingredients are assembled.

Begin by placing a designated welsh cake griddle (cast iron) on the smallest burner on the stove. Heat must be on lowest flame or heat.
In a large bowl whisk together the flour, sugar, cut the butter into small pieces add to the mix and blend together with two knives (or mix by rubbing with your fingers) now the mixture should look like large crumbs.

Add the raisins or sultans and stir into the mix. Then add the beaten egg to make a light dough.

Transfer the dough to a lightly floured flat surface, gently kneed the dough until it is flat and about ¼ inch (0.75 cm) thick then with a round pastry cutter or a glass will do, cut into 2.1/2 inch circles.

Lightly butter a bake stone (griddle) and test one cookie cut out by placing the mixture on the griddle and bake on each side for about five minutes until golden brown in colour; they should still be soft on the inside.  Once test cookie comes out evenly beige in color, add 4 cookie cut outs at a time and repeat procedure.

Once baked sprinkle with granulated sugar.

Welsh cakes are cooked on a flat heavy iron griddle (with no ridges) on a low constant heat. The griddle would only be used for welsh cakes. The best griddles are past through the generations, although they can be bought in Wales.