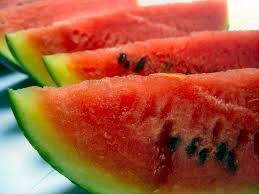 Each individual’s “bio-chemistry and predisposition” to disease is unique and  are continuously being explored in the medical world. While a new diet is not designed to be a monthly fad, the Low Acid Diet can be applied to most individuals, especially those who may combat stomach discomfort.

The normal bodily pH of 7.35- to 7.45 keeps our bodies in homeostasis. Water has a neutral pH 7; all  foods and beverages can then labeled as more basic, for numbers higher than pH 7, or they maybe be classified as acidic, for numbers are lower than pH 7.

The Low-Acid Diet has benefited: weight loss, treats those suffer from Acid Reflux, GERD, curves Osteoporosis, and improves Laryngopharyngeal Reflux. This diet is safe for those who like to change their dietary routine and/or introduce some new foods into there meals or snacks.

A salad with the Low Acid Diet ingredients can benefit anyone!

Watermelon ranks the highest on the list of basic nutrition, other foods are: beans, nuts, olive oil, lettuce, celery, broccoli and grapefruit.  Interestingly, many of these foods are also contributors to keeping the liver healthy by synthesizing bile salts and secreting bile acid so that toxins do not build in the body and regular bowel movements occur daily. Those who suffer from IBS will also be able to follow this diet.

Complete nutrition includes both basic and acidic foods and should be a part of 3 square meals. Acidic foods have been listed as the following, consume in moderation: processed foods, coffee, alcohol and animal proteins found in dairy products, red meats, chicken, fish.

In conclusion, all foods can be eaten in controlled amounts, those with specific needs should review individual concerns with your doctor or dietitian before adjusting your dietary intake.

Visit Recipes for ideas on how to supplement your meals.
Fava Bean Soup
Vegetable Couscous
Lentil Soup with Natures Cure

Recommended daily intake of vitamins and minerals and actual breakdown of Vitamin Content for Vegetables and Fruits with a glance at Mineral Content on Fruit and Vegetables Informative links that nicely graphs the proper milligrams of vitamins and minerals that should be ingested on a day to day basis with warnings about how they may create organ sensitivity or organ damage.

Eat Know How.  Know the Healing Power of Food

FDA is warning consumers to avoid eating tomalley in American lobster (also called Maine lobster), regardless of where the lobster was harvested, because of potential contamination with dangerous levels of the toxins that cause paralytic shellfish poisoning (PSP). These types of   lobster are harvested from the Atlantic Ocean from Northeastern Canada to South Carolina . The FDA advisory applies only to tomalley — the soft, green substance found in the body cavity of the lobster that functions as the liver and pancreas. Cooking does not eliminate the PSP toxins.

FDA has approved a novel genetic test for determining whether patients with breast cancer are good candidates for treatment with the drug Herceptin (trastuzumab). The SPOT-Light HER2 CISH test kit measures the number of copies of the HER2 gene in tumor tissue. This gene regulates the growth of cancer cells.

FDA has notified makers of fluoroquinolone antimicrobial drugs that a “boxed warning“ in the product labeling concerning the increased risk of tendinitis and tendon rupture is necessary and a guide must be made available to patients that explains possible side effects. Fluoroquinolones are approved to treat or prevent certain bacterial infections.

U.S. marshals have seized nearly $74,000 worth of Xiadafil VIP tablets (lots 6K029 and 6K209-SEI) distributed by Florida-based SEI Pharmaceuticals Inc. Although this product is marketed as a dietary supplement to treat erectile dysfunction and for sexual enhancement, these lots represent an illegally marketed drug containing an undeclared ingredient.

› Are You Storing Food Safely?

For a list of recalls, market withdrawals, and safety alerts involving FDA-regulated

products from the past 60 days, go to http://www.fda.gov/opacom/7alerts.html.

FDA is revising the way it communicates to drug companies when a marketing application cannot be approved as submitted. The agency will no longer issue “approvable” or “not approvable” letters when a drug application is not approved. Instead, it will issue a “complete response” letter that lets a company know the review period for a drug is complete and that the application is not yet ready for approval. The letter will describe deficiencies and, when possible, will outline recommended actions the applicant might take to get the application ready for approval.

FDA has proposed major revisions to physician labeling for prescription drugs (including biological products) to provide better information about the effects of medicines used during pregnancy and breastfeeding. The changes would give health care professionals more comprehensive information for making prescribing decisions and for counseling women about using prescription medications if they are pregnant, breastfeeding, or of childbearing age.

To access the RSS feed of FDA news releases, go to

[What is an RSS feed? See http://www.fda.gov/bbs/topics/news/newsfeeds.html.]

Reason for recall: a precaution due to results of tests on a single package for E. coli O157:H7

Under discussion: pending application to market a surgical sealant

For a complete list of upcoming meetings, seminars, and other public events sponsored

or co-sponsored by FDA, go to http://www.fda.gov/opacom/hpmeetings.html.

Note to readers:  “Start at the Store: 7 Ways to Prevent Food-borne Illness.” http://www.fda.gov/consumer/updates/foodillness051308.html.

— Maker, Distributor of Cough and Cold Products Barred After Violations

FDA has announced the shutdown of cream cheese and seafood operations at Illinois-based Lifeway Foods Inc. and its subsidiary, LFI Enterprises Inc., until they comply with food safety laws. The  action follows a history of violations of food and drug law dating back to at least 2004.

FDA has directed Texas-based Hope Food Supply Inc. to shut down and recall all seafood products manufactured from its facility since 2007. An earlier consent decree required the company to develop and implement an adequate Hazard Analysis and Critical Control Point (HACCP) plan for its fish and fishery products. Because the company has not developed this plan., it cannot restart manufacturing until an FDA-approved HACCP plan is in place. Seafood processors must implement adequate HACCP plans that identify all food safety hazards likely to occur for each kind of seafood product that they process, and set forth preventive measures to control those hazards.

Maker, Distributor of Cough and Cold Products Barred After Violations

Scientific Laboratories Inc. and two company executives are barred from manufacturing and distributing drug products until they bring their manufacturing operations into compliance with law and obtain approval for their products. Scientific Laboratories is a contract manufacturer and distributor of various prescription cough and cold products. FDA had warned the company against violating food and drug law and about the risk of enforcement action if it failed to take corrective measures.

To view an archive of past testimony by FDA officials, go to

FDA has approved the first generic versions of Requip (ropinirole hydrochloride) tablets for the treatment of moderate-to-severe restless legs syndrome. The approval covers a variety of dosages. Four companies have received approval to market the tablets.

FDA has approved a new formulation of the genetically engineered version of Factor VIIa, used to treat bleeding and prevent surgical bleeding in patients with hemophilia A or B. The new formulation allows the product to be stored at room temperature (up to 77 degrees Fahrenheit) for up to two years. This is helpful for healthcare facilities with limited refrigerated space, and it allows greater flexibility in disease management for both patients and doctors.

May 1 — FDA Center for Drug Evaluation and Research Director Janet Woodcock, M.D., appeared before the House Subcommittee on Health.

Reason for recall: may contain soy not declared on the label

For a list of recalls, market withdrawals, and safety alerts involving FDA-regulated

products from the past 60 days, go to http://www.fda.gov/opacom/7alerts.html.

FDA has issued an order requiring that Illinois-based Evanger’s Dog & Cat Food Co. Inc . obtain an emergency permit from FDA before its canned pet food products enter interstate commerce. A recent inspection revealed significant deviations from prescribed documentation, which could result in underprocessed pet foods that can allow the survival and growth of Clostridium botulinum, a bacterium that causes botulism in some animals as well as in humans. For Evanger’s to resume business, the company must document that corrective actions and processing procedures have been implemented to ensure that the finished product will not present a health hazard.

FDA has approved Cimzia (certolizumab pegol) to help sufferers of moderate-to-severe Crohn’s disease who have not responded to conventional therapies. Crohn’s disease is a chronic, inflammatory bowel disorder that affects more than 1 million men and women worldwide. It has no cure and its cause is unknown. Patients treated with Cimzia will receive an injection every two weeks for the first three injections. Once benefit has been established, Cimzia should be given once every four weeks.

FDA has approved Relistor (methylnaltrexone bromide) to help restore bowel function in patients with late-stage, advanced illness who are receiving opioids on a continuous basis to help alleviate their pain. Such patients include those with a diagnosis of incurable cancer, end-stage chronic obstructive pulmonary disease from emphysema, heart failure, Alzheimer’s disease with dementia, HIV/AIDS or other advanced illnesses. Opioids can interfere with normal bowel elimination function by relaxing the intestinal smooth muscles and preventing them from functioning. Relistor acts by blocking opioid entrance into the cells thus allowing the bowels to continue to function normally.

› Bertek and UDL label Digitek (digoxin tablets, USP, all strengths) for oral use

Reason for recall: tablets may contain twice the approved level of active ingredient

Reason for recall: product may contain milk protein not declared on label